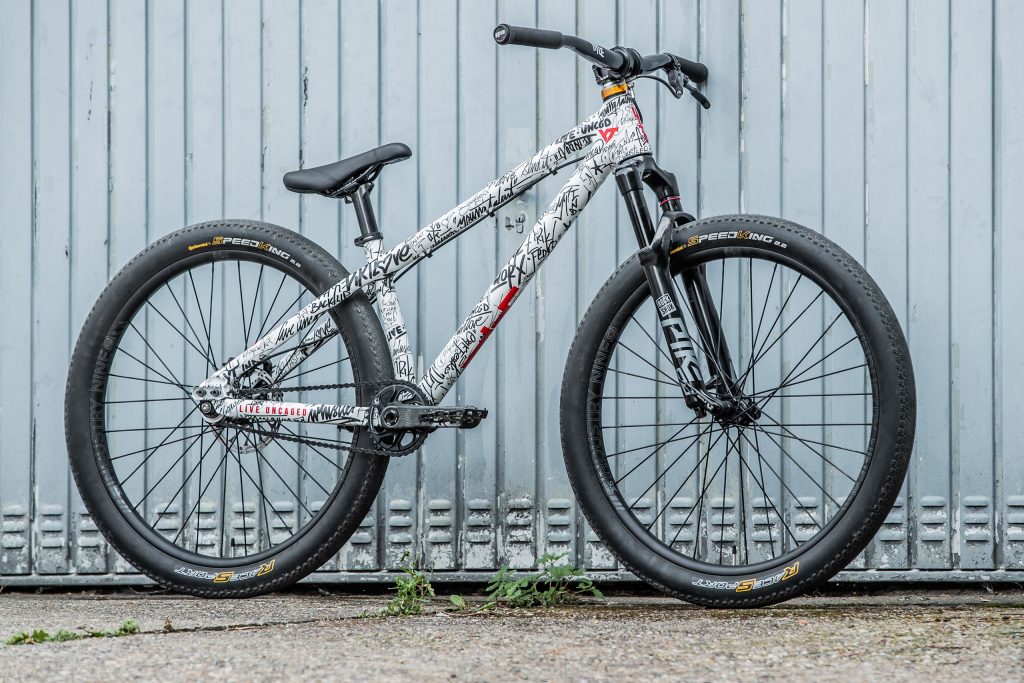 Here for the latest news? The Rotorua bike-check has landed.

A local legend in his home nation of Germany and to the home of YT Industries, Erik Fedko’s talent and has earned him worldwide acclaim, and rightly so. Joining us in 2022, the style icon of slopestyle was a no-brainer choice for YT Industries, a brand born in the dirt where its roots run deep into dirt jumping. Here’s the journey of Erik Fedko’s custom dirt frame for 2022.

Fedko and YT Industries hit the ground running with a shared goal in mind; to create a bespoke dirt jump frame that would unleash “Fetty’s” full power and raw potential. The labour of love between athlete insight and YT engineering began early in 2022, ahead of the Crankworx world series. To understand how Fedko’s custom dirt frame was born, you have to hear it from the source. Introducing Franziska Heidl, the YT Engineer responsible for Finite Element Analysis (FEA), a process which assesses high-stress areas in advance of physical testing.

“Time was a big challenge. Everyone wanted to see Erik riding this bike at Crankworx Innsbruck. But of course, we wanted the bike to be as safe and good-looking as possible. We had some stress areas occur in the FEA, so we made some adjustments until the frame design fits all requirements from an engineering and design perspective. Finally, the FEA helped us pass the testing of our first bike version on the first try.”

“One key difference is the frame material. We’re using steel for the YT Dirtlove, and for Erik’s Prototype, we used aluminium. We also used the Prototype frame to add some details that Erik wished for, and we want to experiment with them as well, such as dropouts and crankstop interface. The Geometry is also based on Erik’s feedback which differs slightly from the Dirtlove.“

“I think for every developer out there, it’s the best feeling when you see the product you worked on with someone really enjoying it. So seeing Erik riding this bike and then even taking second place at Crankworx Innsbruck was the best feeling and worth all the work.”

Three frame designs have been created for the Crankworx world series 2022. At Innsbruck in July, Erik’s custom frame was adorned with a galaxy-inspired paintwork, which we saw him rocket into 2nd place. For Whistler in August 2022, our designers crafted a more urban graffiti-inspired design, blasting the frame with good vibes. For the last stop, we’ve unveiled the third and final custom design, and, spoiler alert, it’s a favourite at HQ – scroll down for the goods.

“I’m just happy that the bike looks like this now. We have repeatedly optimised and adjusted many small things so that it now really corresponds to my wishes, both visually and technically.”

This is it – the final stop of the tour. Another Crankworx, another fresh paint job for Erik Fedko’s custom dirt jump bike – and we’ve saved the best till last. These unique designs always have a story to tell, and the creative team has kept the Good Times coming with a tropical, Hawaiian theme.

This custom graphic oozes good vibes, bringing a wave of color to match Rotorua’s unique landscape and electric atmosphere. But the athletes can’t sit back and chill just yet – this is their last stop to make their mark on the leader board, and for Fedko, his chance to take the overall.

The frame design was inspired by ‘Aloha’, which matches the vibe of Rotorua. I love the details of the palm trees as well as the color, it’s definitely different from my other two frames.

I’ve been testing and developing this custom frame with YT Industries. We’ve come a long way as far as the final bike is concerned. Some changes are still in the pipeline, but I can’t reveal that at this point.

Roll on Sunday – keep your eyes locked on our social channels for all things Rotorua, and check out the DIRT LOVE to start your own slopestyle journey.

Share Link copied
Back to the articles
Media Archive