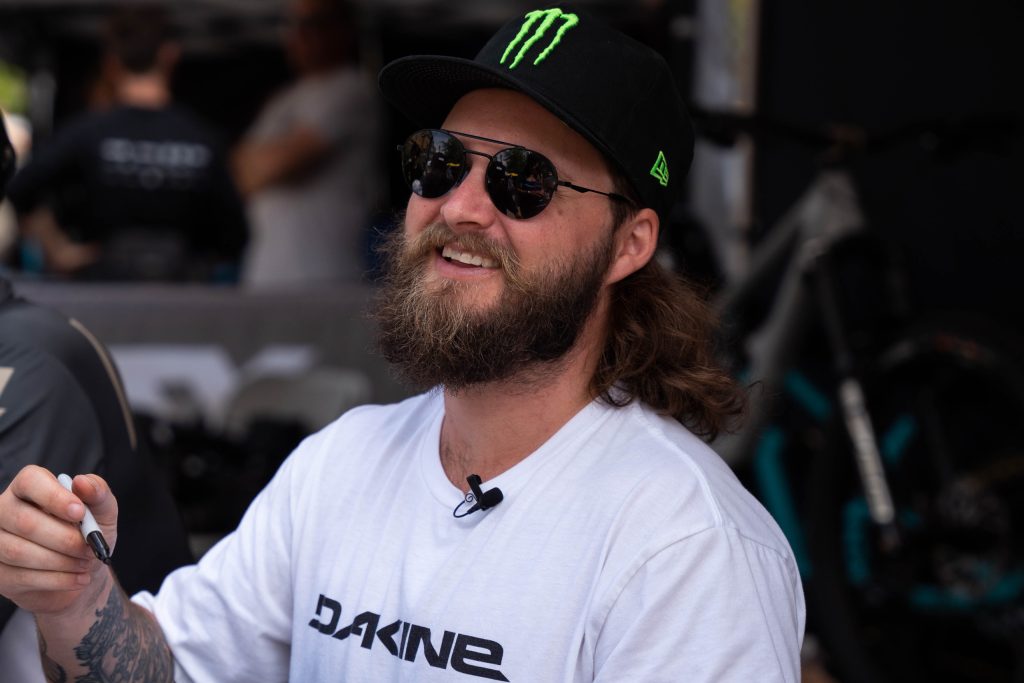 If there’s a rider in the mountain bike universe that requires no introduction, it’s this man. Hailing from Kamloops, Canada, Graham “Aggy” Agassiz is a legend in his own right. Inspiring riders by the dozen, heck, the thousands, this freeride man of mayhem is an established industry icon whose tales of riding, competition, and redemption will long live on through the ages. Highly regarded as no mere mortal, proven by the jaw-dropping list of body breaks and surgical scars, few others can be considered his equal.

We’re standing on the balcony of the YT Athlete home in Whistler, Canada, where the buzz of the great Crankworx return has whipped the village into an electrifying frenzy. Although not yet race-ready to compete in the legendary Whip Off, Graham Agassiz is no less here with his custom build Capra, offering pearls of wisdom, collecting Dad jokes from Brett Tippie and enjoying the YT #GoodTimes.

So, where better to start a catch-up than at the beginning when Aggy joined the #YTFamily in 2021? Unfortunately, things haven’t been as smooth sailing over the past 18 months. A tibia and fibula break in the late spring of 2021 saw Graham out of action, leading him to pass up his Red Bull Rampage invite. Then just when he was back on the ride to recovery and feeling strong, fate would twist the trail again, resulting in a more serious injury in the late fall of 2021. Since then, Graham has been recovering, rehabilitating and carrying out some additional bodily upkeep, what he calls an “appendix deletion” procedure. Looking down to his feet, Aggy points out the surgical scarring on his foot, tracing and locating where various pins and plates now reside. However, the bond of man and machine hasn’t prevented the freeride legend from hitting up laps on Whistler’s famed trail, Dirt Merchant, this week, stating, “We’re here in Whistler, and I’m back on my bike again. It’s super good to see everyone shred, so yea, we’re moving in the right direction right now.”

But injury isn’t the only thing to have happened; Graham became a father when he welcomed his son, Miller, in May 2022. As our conversation moves from gruesome injury details to the birth of his son, Graham’s face lights up as he beams, “I became a dad two months ago, and it’s been life-changing. It still hasn’t fully settled in, but now I have this little guy to look out for and provide for, and it’s really cool.” For some, becoming a parent comes with a reevaluation process of sorts; weighing the risk vs reward of professional mountain biking can shift perspective and, with it, a more cautious approach, perhaps. But that’s not the case for Agassiz. Where many assume the legend would begin to slow down into fatherhood, fishing, cruising laps on the bike, the new dad explains otherwise; “[becoming a dad] has motivated me to work harder and keep the programme going to do my best for him. I gotta provide for this little guy now!“

“It’s funny, dad jokes just flow out of me a lot easier now.”

Without a doubt, little Miller is in good hands should he pursue a career in mountain biking, but nurturing future generations of mountain bikers is another passion for Graham. Earlier in the summer, Aggy, Ace Hayden and Dylan Stark headed to the Milepost 35 youth camp. Imparting wisdom, generating stoke and helping young talent progress their skills and confidence is what camps like this are all about. “I remember being like those kids. It’s great to have the riders come in to teach you a couple of things. The progression that you see from the beginning to the end of the week is massive. It’s really cool to be involved in, and it’s something I hope we can continue supporting,” shares Aggy.

Red Bull Rampage is arguably one of the biggest freeride mountain bike events on the calendar. Famed for its unique format, Rampage tests a rider’s limits by challenging the boundary between what’s possible and what’s downright insane. There really aren’t enough descriptors for an event quite like Red Bull Rampage. Words like “steep“, “insanity“, and “holy shit” often spring to mind. Yet, these are the conditions which play to the strengths of the Kamloops-bred freerider.

After six Rampage events, one podium position and an eye-watering list of injuries and accolades, Graham reflects upon the question; is there unfinished business at Red Bull Rampage? “I have a lot of mixed emotions about [Rampage]. It has been that goal of mine for a long time, and I’ve worked really hard at it over the years. It’s something I’ve always been thinking about, but I just need to be healthy and ready for it so that I can make that decision at the end of the day.” So with Rampage taking a backseat (for now), what’s on the agenda for Aggy?

“[Red Bull Rampage] is something I’ve always been thinking about, but I just need to be healthy and ready for it, so that I can make that decision at the end of the day.”

“Right now, I’m focussing more on storytelling and content creation and doing video projects, like this bucket list thing I’ve been waiting to do for a long time.” Bucket list, you say? “Yeah, it’s all kinds of stuff, like trips to hidden spots and special lines“…”I want to tell a different story and show the process of what goes into getting in the shot. It’s not just a five-second shot in and out. That shot took two weeks to build a feature, and you can’t tell just how gnarly it is on camera sometimes. I want to show more appreciation for the creation, the filmers and photographers involved and tell their part of the story too.”

We finish our catch-up with our phones in hand, sharing our current favourite bands on Spotify. For me, it’s Cobra Man, and for Aggy, it’s “Cocaine Country Dancing” by Paul Cauthen, his elected tune for Whistler ’22. We can’t wait to see Graham back to full health, sending style like there’s no tomorrow. Go give the legend a follow on Instagram, you know you want to.

Share Link copied
Back to the articles
Media Archive